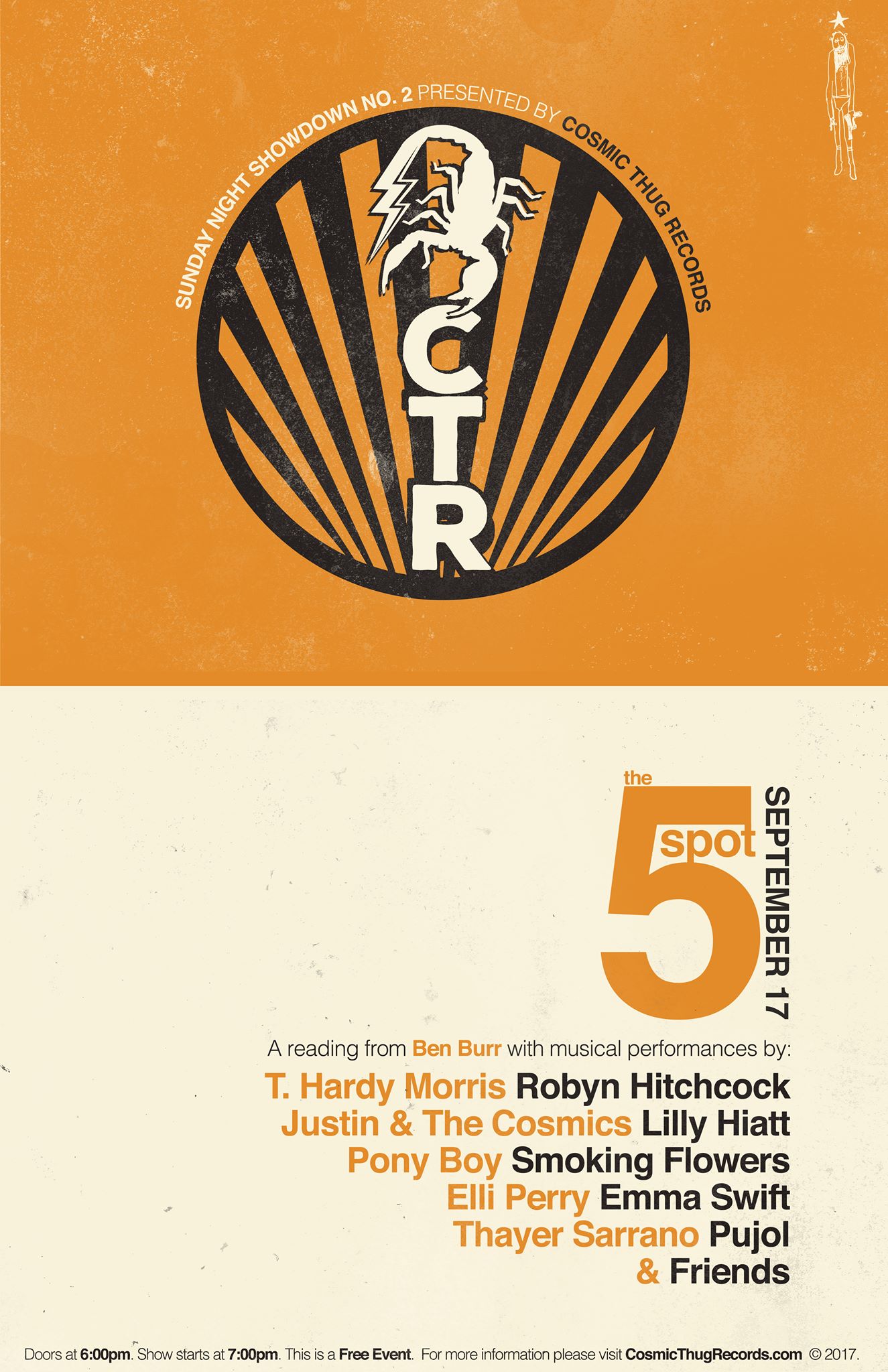 September 17, 2017 (Sunday) - It's an extravaganza -- CTR-Style. The masterminds of Cosmic Thug Records (CTR) are bringing it. It's their second such annual event, in a post-Americana Fest -- it's like the bric-a-brac on the wall at Applebee's or Fuddruckers, only for music -- world. (Admittedly, we haven't been to either of those eateries since the third-grade. They might well be all postmodern by now. Please send us postcards if this is so, and we will send out circulars of apology to all involved -- from the mayor of Nashville, to appetizers and lunch combos everywhere, even Ruby Tuesday's.) Today's CTR buffet offers you a stellar line-up, including the irreplicable Thayer Sarrano. You will also hear performances by an Egyptians-less Robyn Hitchcock and Emma Swift. Care to be schooled? Watch this live solo acoustic rendition of Hitchcock's "Chinese Bones," a song which first appeared on the album Globe of Frogs, boasting arpeggios then from Athens own Peter Buck. Our Guildwater Scriptorium once boasted a vinyl copy of the record, before it melted off into scratches and ether, as all great records must, in the heat of the Southern turntable. Meanwhile, back at The 5 Spot, your ears can also catch, proceeding alphabetically now: Lilly Hiatt, Justin and the Cosmics, T. Hardy Morris, Elli Perry, Pony Boy, Pujol, and The Smoking Flowers. You can also feast upon a reading from Ben Burr, a poet from the pages of the Cosmic Thug Press arm.

In case you missed our earlier memo, Cosmic Thug is the brainchild of Justin Collins (of Justin and the Cosmics fame), and producer / musician Adam Landry of Playground Sound. You can read all about their thuggish plans for world dominoes in The East Nashvillian. That very same print-magazine issue featured on its very cover, we should note, Robyn Hitchcock. We've been setting this up for months now, our Archives reveal to us, almost as if we envisioned it from the beginning. (We did. We just didn't know it.) In conclusion, for our lay readers, we feel obligated to expand upon the terse definition of Americana offered up above. Don't be misled. It's not at all star-spangled patriotic, as its name might suggest. Because nothing spoils folk art more than capitalistic propaganda, hot dogs, and a baseball mitt. Rather it's pro-Soviet -- Americana. If you imagine Vladimir Putin or Leonid Brezhnev or, why, even Gogol (our hero), or Dostoyevsky, and Rasputin all doing the two-steppe (double sic) out in the frozen tundra of Siberia, wearing cowboy boots, ten-gallon hats, and thick Slavic twangs for spurs, you're only getting warmer. That's what El Lissitzky told us anyway, yesterday over lunch, at Chili's. More simply, Americana is essentially folk music with or without electricity. And kind of like how Bobby Dylan once defined folk music in an interview from 1965, it is "a constitutional replay of mass production." You can take the Ryman. We'll take Ryazan, like Vasili III, and a bowl of Ramen noodles. Just sayin'. Adiós, muchachos y muchachas.

August 18, 2017 (Friday) - Thayer Sarrano plays the Altamont Theatre in crisp-aired Asheville, North Carolina. Sarrano lasted visited Asheville in September of 2015, when she performed at Warren Wilson College, as part of the Shaky East Coast Tour 1.0. (You can read about those fine adventures in our ever-opulent Guildwater Archives.) This evening's Sarrano show is in support of Nicole Atkins, whose new album is out now on Single Lock Records. It is entitled Goodnight Rhonda Lee. Snatch up your copy of this vinyl platter while supplies last. Exclaim! magazine decrees: "Amid soulful, R&B-indebted sounds married smoothly to the more country-leaning, Atkins has created her best and most resounding work yet."

If you were unfortunate enough to miss the recent Atkins Audiotree performance, when it popped live (fanciful way of saying: "streamed") over a week ago, we'll provide the appropriate links, once the official videos rise up off the cutting floor (fanciful way of saying: "are released"), because that would be Thayer Sarrano on keys. [Addendum: The videos have now risen up, since the time of this initial writing: Nicole Atkins - Audiotree.] Gracious thanks to the Atkins Camp for inviting Thayer along for these Rhonda Lee festivities. Tonight's rock show is brought to you by the good people of Worthwhile Sounds.