December 07, 2017 (Thursday) - After some desert-trekking, fitting for a composer of desert hymns, Thayer Sarrano eases up the West Coast, displacing time and space, from San Diego to Los Angeles. This evening Sarrano plays The Bootleg Theater. As mentioned previously, Thayer last played LA earlier this year, at Genghis Cohen, in March. Prior to that, our Guildwater Scriptorium reveals a trinity of shows there in December 2015, when Sarrano played: The Viper Room, Harvard & Stone, and The Hotel Café. Should you care to take a stroll down memory lane, perusing our scrolls, you could do no worse than to start here. There we Scribes weigh-in on everything from Johnny Depp, to River Phoenix, from Johnny Cash, to Tom Waits. Even our tonsures, symbolizing our humility, cannot hide, much less quell, the ill-will of our crotchety quills, sometimes.

Tonight's Sarrano Show is in support of that riveting headliner Nicole Atkins. Her new album, Goodnight Rhonda Lee is out everywhere. Pick up your copy of the record of which American Songwriter writes, Atkins "creates a defining portrait of an artist whose grasp of the past creates ageless, enduring music for any year." If you haven't yet caught the video for the lead single for Goodnight Rhonda Lee -- “Listen Up” -- over on YouTube, this would be your loss. This latest studio release represents Atkins' fourth. Moving forward chronologically, there is: Neptune City (2007), Mondo Amore (2011), and Slow Phaser (2014). 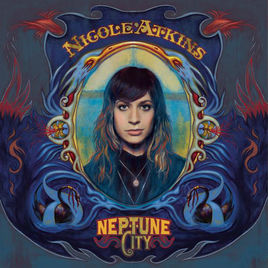 As was the case with the Atkins Show in San Diego a few nights ago at the Soda Bar, also performing tonight at the Bootleg Theater will be Lauren Ruth Ward, who is a Los Angeles-based musician, and Baltimore native. From Ward's presser, we read: "Her band re-creates 60's rock and roll nuances, allowing Ward to release a powerhouse of raw, visceral emotion in their live show." Ward's backing band is constituted by: Eduardo Rivera, Livia Slingerland, and India Pascucci. Ward released her self-titled debut EP in 2016.